On the 2nd and 3rd of February, the third transnational partner meeting of the Erasmus+ funded EU project EICAA took place as a hybrid meeting in Antwerp. Besides constructive discussions on various milestones, those present on site could enjoy the charm of the city of Antwerp. 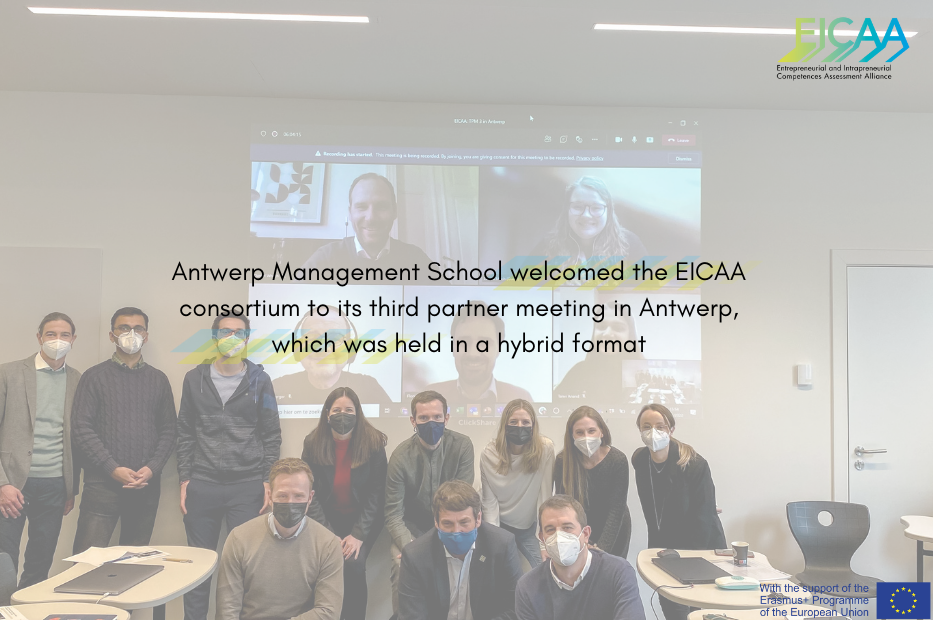 After two transnational partner meetings held online, Antwerp Management School welcomed the EICAA consortium to its first hybrid meeting in Antwerp, Belgium in early February. The two-day meeting of the Knowlede Alliance, established under Erasmus+, contributed to a closer connection between all EICAA core collaborators and thus to the progress of EICAA itself.

On the first day, after a status update and an outlook on the rest of 2022, the focus was on Work Packages (WP) 2 and 3. WP2 is about the conceptual framework of EICAA while within WP3 the rubric system methodology and monitoring instrument for competence assessment will be developed. So in the beginning, the main outcomes of WP2 were highlighted and the structural representation and visualization of the framework were discussed, as well as further inputs were collected from all partners. In the second part of the day, the partners dealt with WP3 and the next steps for the rubric and survey.

The productive and successful day ended with a guided city tour followed by a Belgium beer tasting.

On the second day,  the planning and structuring for WP4 (EICAA – Intervention Repository) and WP5 (EICAA – Digital Platform) took place. The focus was on the transition from each work package to the following ones. In addition, dissemination partners presented insights on ongoing dissemination and provided information on other relevant activities (conferences, workshops, etc.). The next physical meeting is planned for May 2022 in Innsbruck.

All in all, it was a successful third EICAA Partner Meeting and an important milestone for the further development of the EICAA project.