An EICAA partner's point of view 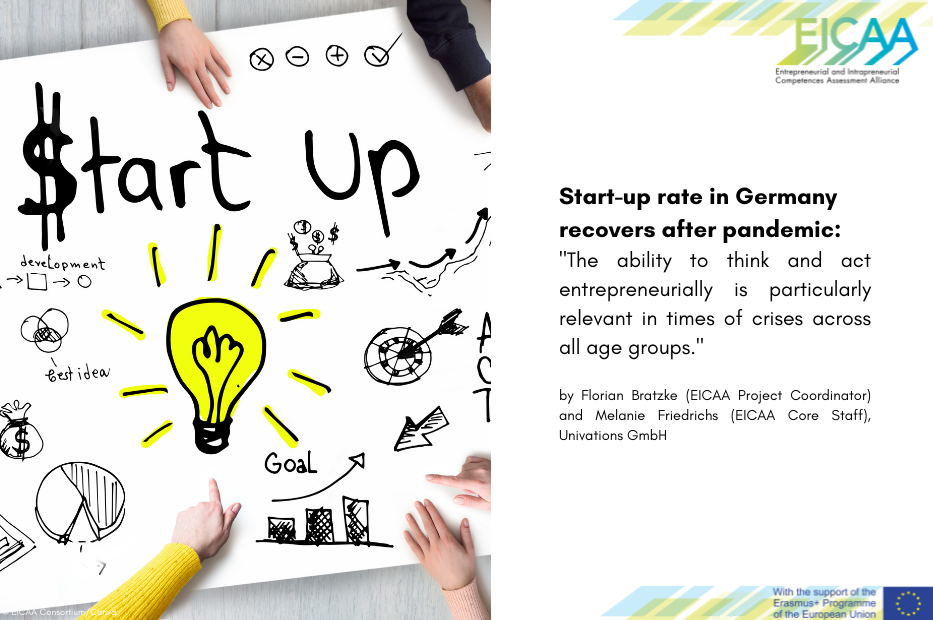 The GEM country report for Germany was recently published in cooperation with Leibniz Universität Hannover and the RKW Competence Centre. The report presents the insights concluded from almost 3.400 respondents. Three interesting facts are examined in more detail below.

The most important and at the same time positive news concerns the level of start-up activity reached in the year 2021: After the particularly uncertain pandemic year 2020, the so called Total early-stage Entrepreneurial Activity¹ (TEA) seems to be recovering. At 6.9 %, it is at its second-highest level since the GEM was launched in 1999, bringing the TEA rate closer to the peak recorded in 2019 (7.6 %).

According to the GEM country report Germany, entrepreneurial activity seems to be going up even further, as the pandemic, despite all its negative effects and tragic consequences, is also perceived as an opportunity for some: It is thus no coincidence that more than one third of founders in Germany agree with the statement that the pandemic has opened up new business opportunities. In addition, 29 % of the founders of young companies surveyed in 2021 (“young entrepreneurs”, i.e. those founders who have started a company in the last 3.5 years) stated that they use digital technologies to sell products or services in response to the COVID-19 pandemic.

Regarding young companies founded within the last 3.5 years, it can also be said that their number has increased slowly but steadily over the years (with the exception of 2020). Thus, 2.7 % of 18–64-year-olds belong to the so-called “young entrepreneurs”. In comparison, this share was on the level of 1.7 % in 2016. To add, the share of respondents who at least planned to start a new business is 4.3 % in 2021 and thus only about one percentage point lower than in the record year 2019.

Another analysis of country report looks closer at the age of the founders. Not surprisingly, it is concluded that starting up a business is more probable among younger age groups. While 6.8 % of all respondents have become or planning to become entrepreneurs, as described above, the TEA rate is significantly higher within the age groups 18-24 years and 25-34 years, with 8.3 % and 10 % respectively. In contrast, only 3 % in the cohort of 55–64-year-old persons have started or plan to start a venture.

What can we derive from the GEM for our work in the EICAA project? First, times of drastic change, as experienced during the last years, not only bear risks to businesses and the society but also create chances for new business opportunities. Secondly, the ability the think and act entrepreneurially is particularly relevant in times of crisis across all age groups. Such ability prepares people better to quickly adapt to new conditions in their environment and to work on alternative solutions to overcome given challenges. The rapid development of new vaccines against the coronavirus disease is an extraordinary example for this.

However, the GEM methodology relies on a classic start-up centred understanding of entrepreneurship which does not capture the entrepreneurial mindset of those that are not starting-up businesses. Despite, the recent years have underlined that such mindset is an important asset for individuals in nowadays rapidly changing world as well as for fostering resilience in times of crisis. In contrast to GEM, EICAA relies on a wider and domain neutral conceptualisation of entrepreneurship (“creating value for others”) – following the approach of the European Entrepreneurship Competences Framework (EntreComp) but also validating and updating the latter with a proper EICAA Competence Framework (will be published soon). Thus, EICAA resources are not only established to benefit a rather small group of (nascent) entrepreneurs. Rather, they may be transversally exploited within both the world of work and the world of education.

Moreover, thinking and acting entrepreneurially is a relevant across all generations (see GEM results above) and, hence, integral to the lifelong learning mission. As such, the outcome of entrepreneurship education is that learners know what they can achieve and understand how to make progress towards maximizing their individual contributions in any role in society (Hannon, 2005) and at any given age. After all, this is what EICAA wants to contribute to by establishing an innovative online platform that enables its users to foster entrepreneurship education more efficiently.

¹TEA represents the percentage of 18-64 population who are either a nascent entrepreneur or owner-manager of a new business in the last 3,5 years.

Sources:
Hannon, P. (2005), ‘Philosophies of enterprise and entrepreneurship education and challenges for higher education in the UK’,
International Journal of Entrepreneurship and Innovation, Vol 6, No 2, pp 105–114.